When octopuses undergo their terminal reproductive phase and senescence, they experience extreme physical decline over a period of weeks or months before eventual death. With an increasing demand for welfare standards in zoos, aquariums and labs, the need for research examining physiology is increasingly necessary. However, studies examining physiological changes occurring during senescence and their implications for welfare are uncommon. This study aims to understand if the giant pacific octopus, Enteroctopus dofleini, experiences significant changes in nociceptive physiology during senescence, and how this may affect their welfare. Nociceptive behavior and sensory thresholds were measured using a series of 5 von Frey filaments in ascending series to several body locations. In a multi – site, longitudinal study of GPOs held in public aquaria, changes in nociceptive behavior were measured from when animals were healthy and compared to behavior as they declined through senescence. Additionally, we measured apoptosis and necrosis in peripheral nervous, muscle, and skin tissues fixed at the point of euthanasia. Preliminary results suggest that E. dofleini experiences hypersensitivity as animals near death, which may indicate a negative welfare state, and then a complete absence of behavioral nociception response the day or two before death, suggesting severe, terminal degeneration of tissue that is nociceptive to E. doflieni. Novel perspective on how senescence may compromise welfare will be pivotal to setting guidelines and recommendations on ethical care of animals in terminal decline. 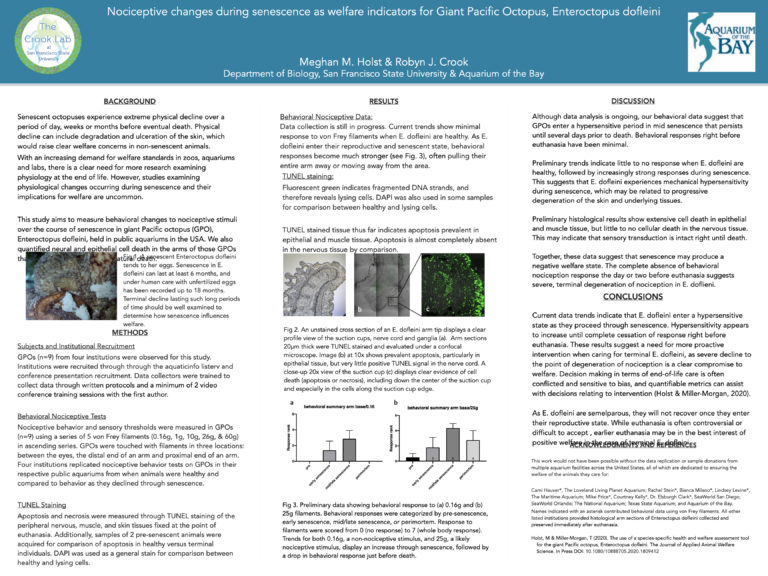