In spite of its cosmopolitan distribution, little has been reported on the life cycle and reproductive biology of Argonauta nodosus Lightfoot, 1786. This study aims, therefore, to improve understanding of the life cycle and reproductive biology of this species from southern Brazilian waters. All stages of the life cycle, from hatchlings to adults were examined, including 27 shells with eggs, 19 adult females and 28 males, which were collected with bongo nets (60 cm mouth diameter), rectangular midwater trawl (opening area 8m2) and throw nets between 28°09′ and 33°S. Females were measured and the mantle cavity was opened to check for the presence of hectocotyli. The majority of females (n = 17, 21 to 46 mm mantle length – ML) had stored several hectocotyli (up to 11 in a single female), however, the number found appeared uncorrelated with female ML. The presence of multiple hectocotyli in some females suggests that males could potentially be more abundant.
Among the males examined, no one had deployed the hectocotylus, and the largest male retaining an intact hectocotylus was 6.8 mm ML. The hectocotylus diameter increased linearly in relation to the mantle in males <5 mm ML, but became considerably larger in larger males, indicating the hectocotylus develops quickly in males > 5 mm ML. The eggs found inside the shells had a mean diameter of 1.46 mm and were at different developmental stages, indicating intermittent spawning, which corroborated with the presence of hatchlings in plankton samples year around. These findings reveal important aspects of the life history of A. nodous, which are presented and discussed. 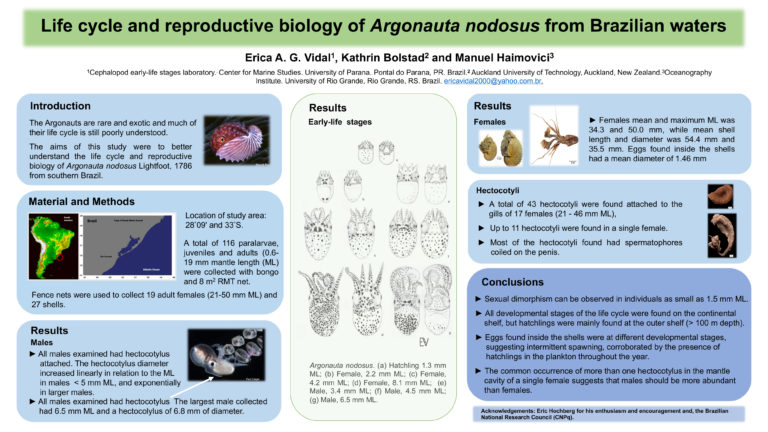