Two commercial squid species genus Loligo (L. vulgaris and L. forbesii) with nearly coinciding species ranges inhabit waters around Europe from the east Mediterranean to the North Sea. Both species reproduce all year round with distinctive peaks, mostly in the cold season, and mature females of both species are often captured together in the same hauls. Their spawning grounds overlap spatially: L. vulgaris lay eggs mostly at 20 – 50 m, down to ~100 m while L. forbesii is slightly further offshore – at 10 – 150 m, occasionally down to 300 – 700 m. Egg size increases several times during embryonic development making this feature unreliable for species identification without additional information. Our study summarises existing literature data on egg capsule length, number of eggs per capsule and egg/embryo size at the particular developmental stage throughout the species range, together with information from genetically identified squid egg masses collected in 2017 – 2019 in the West English Channel and Celtic Sea. Resulting guidance will allow future identification of egg masses, including information gathered by recreational divers during The Cephalopod Citizen Science Project. Measurement and counts of egg clusters used in this study (depth 18 – 155, mean 66 m) as well as historical data from the same area, January to August (Holme, 1974 J. mar. biol. Ass. U.K. 54, 481 – 503), revealed that all sampled egg clusters belonged to L. vulgaris. No L. forbesii spawning was yet observed in the Western English Channel and surrounding waters though this species potentially might reproduce there. 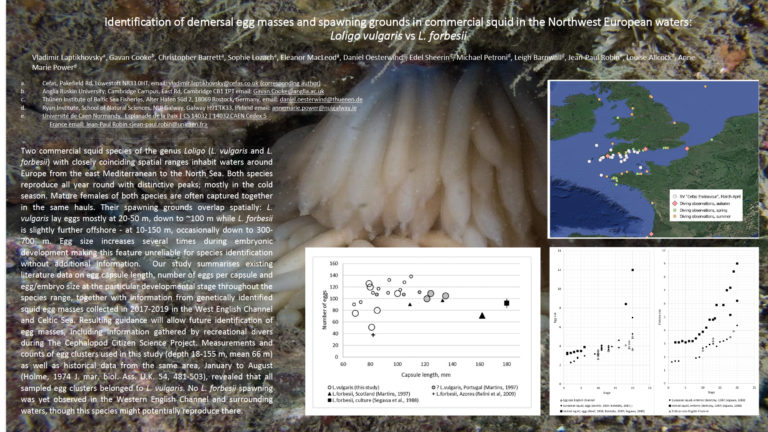