An Atlas of the Embryonic Brain Development of Octopus vulgaris: Preliminary Data

Octopus vulgaris is an exceptionally intelligent cephalopod species with a quite wide behavioural repertoire. Previous comparative studies on the embryonic development of the brain in coleoid cephalopods have suggested that brain development is highly conserved amongst them. While the adult anatomy of O. vulgaris brain has been substantially described, the morphological, cellular and molecular steps of O. vulgaris embryonic brain development are less well known. Previously, it was suggested that the embryonic development of its brain develops following multiple spherical ganglia, however, recent studies indicate that the central brain has a cordal origin. Towards the end of the embryonic development, the central brain consists of multiple paired lobes, of which the optical, cerebral, visceral and pedal lobes are the most prominent ones. The cerebral lobes lead to the formation of supraesophageal mass, and pedal and visceral lobes form the suboesophageal mass where both masses are connected to the laterally positioned optic lobes via the optic tract. The main aim of this study is to establish an annotated histological atlas of embryonic brain development of the common octopus, O. vulgaris, up to hatchling, according to the most recently published staging atlas. Conventional histological methods, as well as fluorescent labelling, have been combined to provide an optimized imaging data set of brain sections obtained from O. vulgaris embryos from stages VIII to XX. Furthermore, manual segmentation has been carried out to reconstruct embryonic brains of stages XV.1 and XX. 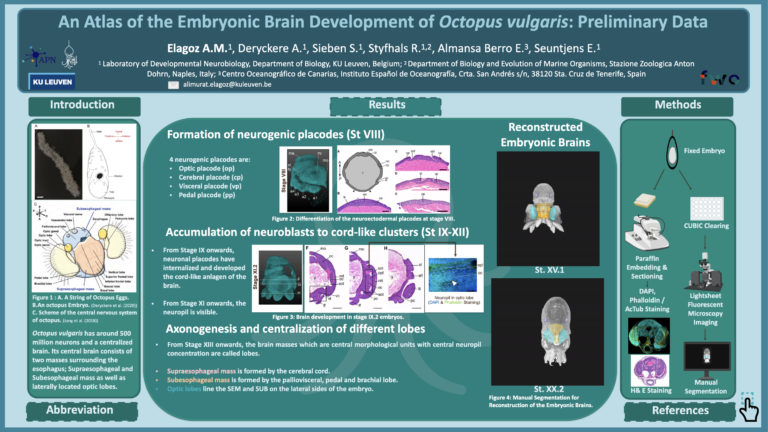